Home > About Us > Our History > Our Sanctuary

Central Synagogue was designed by Henry Fernbach, one of the prominent Jewish architects in America. Its two towers incorporate large spheres topped by spires and three-dimensional seven-pointed stars. A crenellated decorative Belleville sandstone exterior with three entrance portals and two side-aisle entrances surmounted by a great rose window represent an interpretation of the Dohány Street Synagogue in Budapest.

The façade is a symmetrical composition of two sentinel towers topped by copper-clad spheres with gilt decoration. Horizontal bands of stone in contrasting tones of tan and brown and dramatic Moorish stone arches identify these walls as belonging to a singular place. By seizing upon Moorish precedent, Fernbach gave New York a synagogue whose exterior form and detail were popular at the time among many other religious structures in the city. Basilica-inspired in plan, the sanctuary features a tall central nave and two side aisles, with galleries and an organ loft above the entrance foyer. The space is subdivided into six bays by ten slender cast-iron columns that reach down to bedrock and are topped with high relief capitals. The bimah retains the original ark, which is richly carved and inlaid with fretwork patterns highlighted in gold and topped with onion domes finished in celestial blue with three-dimensional gold stars. Above the central dome is a gilded Star of David. 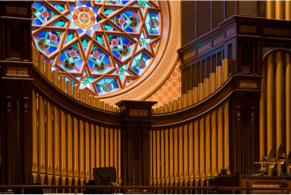 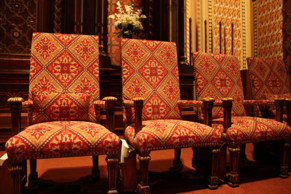 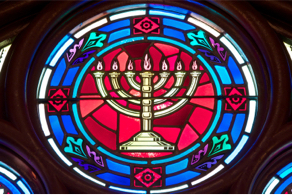