Putting a Face to a Frame 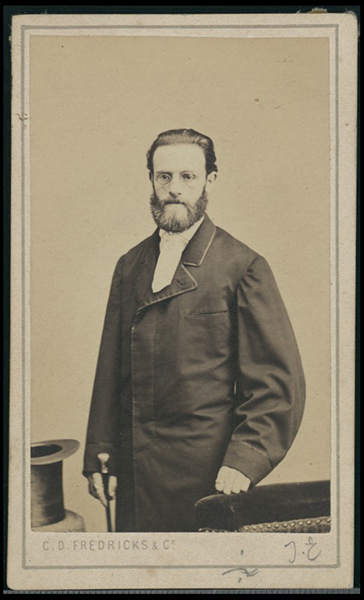 In just a few places stand empty frames. They are placeholders for leaders whose likenesses we do not have. As a lover of history, and a believer that a picture is worth a thousand words, I often mourned these faceless frames. One such empty frame was that of Samuel Welsch. That is, until a couple of weeks ago.

But before we tell that story, who was Cantor Welsch? He was the cantor of Ahawath Chesed (one of the two synagogues that later merged to form Central Synagogue) from 1865-1880.  Welsch came to New York from a cantorial position in Prague. During the years of his leadership, he oversaw the implementation of a more serious musical program at the congregation. He developed a high-quality choir, he composed original liturgical pieces, he represented the congregation nationally and locally, and he championed the liturgical reform taking place across America. He was also the first cantor to sing in our current sanctuary when it was consecrated in 1872. At that point, Welsch had grown the choir to 12 voices and ensured a new three-rank organ was installed in the new sanctuary. Welsch left the synagogue in 1880. A recession had forced the synagogue to cut back on its musical program, and Welsch had the opportunity to return to his homeland in Prague. At the time of his departure, he was widely considered a towering figure in American Jewish liturgical music.

Despite his past renown, he remained faceless today. Many of us would shuffle past his empty frame on the way to the Oneg or rushing down the stairs to get to a program or event. Yet, recently, a couple was peering into the sanctuary, trying to find a way in. It was a Tuesday, after visiting hours had ended. One of our maintenance team observed the couple and approached them. They were adamant that they had to see the synagogue. Our staff member assured them that the next day would allow another opportunity. No, it was important, they replied. Our staff member sensed that this mattered deeply, and took the time to ask why. That is when he learned that they had traveled from Israel, and that their ancestor served as our cantor. He took them to the stairwell to find out who their ancestor was, and there they found the empty frame with the caption inside, “no image available.” Our staff member showed the couple the sanctuary and heard more of their story. It is because of him that we will help make our history whole. The family still bears the name Welsch (they now spell it Weltsch and they eventually moved from Prague to Israel). On a recent visit to Prague, the current patriarch of the family spent time in the Jewish museum where he made a point of finding a photograph of his esteemed ancestor, our former cantor, and conveyed it to us as a gift.

Our outstanding archives team is at work putting together a new frame for the photo. We will now be able to add a face to a frame where once hung the caption, “no photograph available.”

Action Items You Can Take in Response to Recent Protests

Submitting an Absentee Ballot for the Upcoming Election

Your tax-deductible contribution to our Annual Yom Kippur Appeal will provide for Central’s exceptional educational, community, and spiritual programs and help enrich the Jewish experience of our members and the community-at-large.