Where Lines Converge: An Artist Talk With Nell Breyer 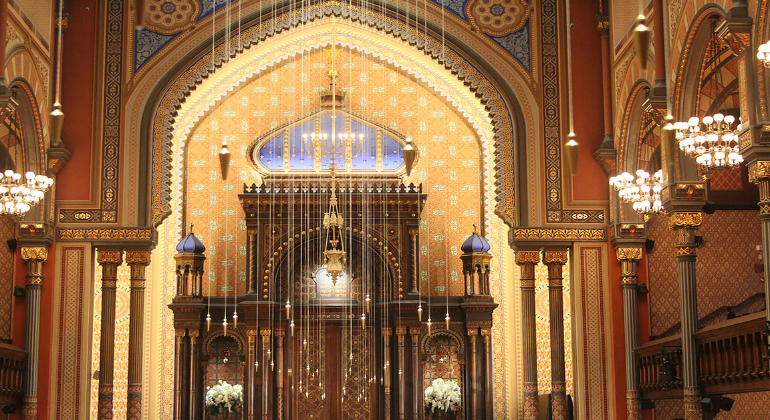 Where Lines Converge: An Artist Talk With Nell Breyer

Where Lines Converge is a stunning, site-specific installation created for the Central Synagogue sanctuary by artist Nell Breyer. In this temporary, commissioned work, lines of string delineate the soaring verticality of the sanctuary and offer a way for visitors to experience the space anew. The installation invites viewers to consider the enormity of activity overhead – the vibrations, light, color, air, temperatures, sounds, matter and movements – within the space and beyond it. By bringing a new visual experience to the Sanctuary, Breyer offers viewers an opportunity to connect to Central Synagogue, to one another, and to the enormity of the Divine.

In this talk, hosted by Rabbi Sarah Berman, Breyer will discuss her work, its meaning, and her influences in creating it.

Where Lines Converge is a site-specific installation created for the Central Synagogue sanctuary. Plumbed lines of string delineate the soaring verticality of the space and appear to converge towards a vanishing point in the sky, beyond the visible confines of the deep blue expanse of ceiling.

The piece offers a choreographic score through which members can experience the sanctuary space anew. The anchored lines of string measure the true vertical of the space along the building’s central axis. The lines are anchored by symmetrical, brass plumb-bobs: an ancient instrument of human measurement used, since the Babylonians, for architectural construction of a perfect vertical, marking an imaginary line that runs straight to the center of the earth.

The anchored lines remain distinctive human acts of measurement, while collectively building a choral gesture that invites viewers to consider the enormity of activity overhead – the vibrations, light, color, air, temperatures, sounds, matter and movements – within the space and beyond it.

The piece draws upon iconic choreographic works for public spaces such as Trisha Brown’s “Man Walking Down the Side of a Building” (1970), and Elizabeth Streb’s “One Extraordinary Day” (2012); as well as minimalist and conceptualist ideas from artists such as Fred Sandback, who noted, of his own work, “A line of string isn’t a line. It's a thing….It’s not a demonstration of an idea. It’s an actuality.”[1] Where Lines Converge also points towards contemporary and culturally-consumed images of cosmic time and interstellar space, such as those vividly depicted in the “Pillars of Creation” – a photograph originally taken by the Hubble Space Telescope (1995), and reseen by the Herschel Space Observatory (2011) and the James Webb Telescope (2022) capturing a site of interstellar gas and dust activity that is in the process of creating new stars whilst simultaneously eroding into eventual destruction.

Acknowledgements and special thanks are extended to the full staff and clergy at Central Synagogue for supporting the realization of this piece.

[1] Draft notes from the artist in intended for the exhibition catalogue published by the Kunstraum, Munich in 1975. First published in Fred Sandback. New York: Zwirner & Wirth, Lawrence Markey, 2004.